Our partner Ana Cláudia Akie Utumi gave an interview to the newspaper Valor Econômico about taxation of the so-called big tech.

A potential agreement between developed countries to institute a global minimum tax for multinationals is on the agenda. However, Brazil not be benefited or impacted by the measure, since it would be shielded from maneuvers of maneuvers of companies in the digital economy to collect less taxes.

Brazil is considered a country of high corporate income taxation. According to Ana Claudia, “a focus of attention is that foreign countries usually analyze withholding income tax in isolation, without considering that Brazil has other taxes on digital services.” 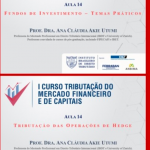