In an interview for the newspaper Valor Econômico, our partner Ana Cláudia Akie Utumi talked about the decision of the Superior Chamber of the Administrative Council of Tax Appeals (Carf) to rule out the incidence of Income Tax on the incorporation of shares.

According to the article, the incorporation of shares is provided for in the Corporations Law and is widely used in acquisition operations, when the buyer wants to maintain the existence of the acquired company, making the acquired company a wholly owned subsidiary and its partners entitled to a stake in the parent company.

While lawyers understand this as a legitimate corporate transaction, without immediate tax effects, which should be charged only when and if the shares are sold in the market, the IRS believes that because it involves transfer of ownership, it should be considered as a sale, and income tax should be charged on the supposed capital gain generated by the business.

In Ana’s view, the values should not be understood as a gain until it is possible to materialize it, but this is not how Carf has been ruling. She reminds that the choice for transferring shares under a stock incorporation operation, normally, does not have tax purposes. “Creating a wholly-owned subsidiary facilitates a series of corporate aspects,” she says. 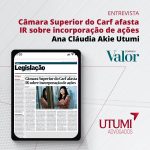